On Christmas day, we were heading for Karuizawa, which is a famous summer/ski resort town, northwest of Tokyo in the mountains, and is just 70 minutes from Tokyo on a bullet train. 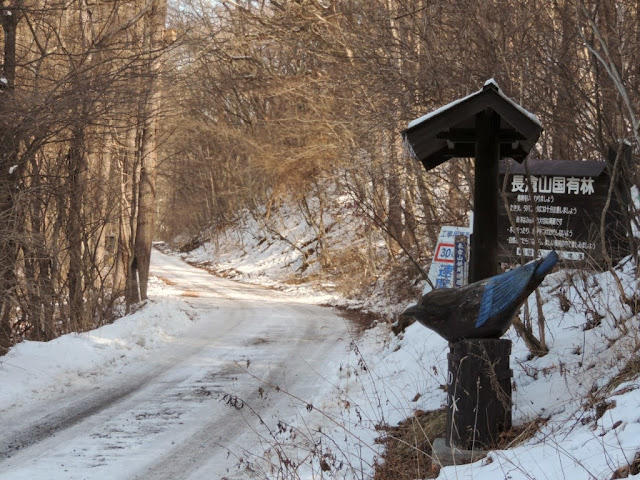 We went on a bird-watching walk three times during our stay, which took us around the sanctuary. 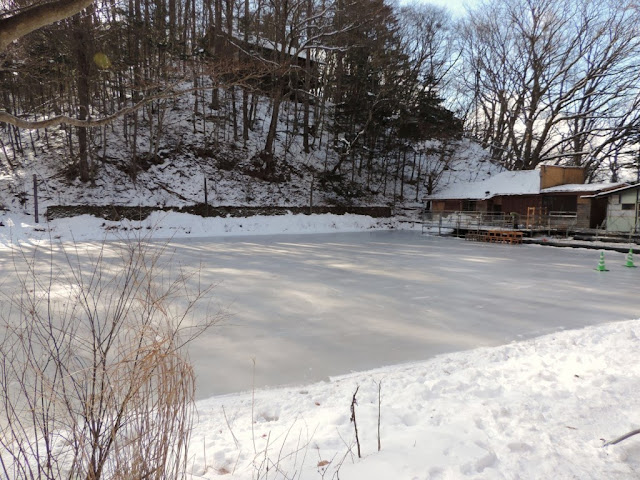 a natural ice-skating rink in the woods 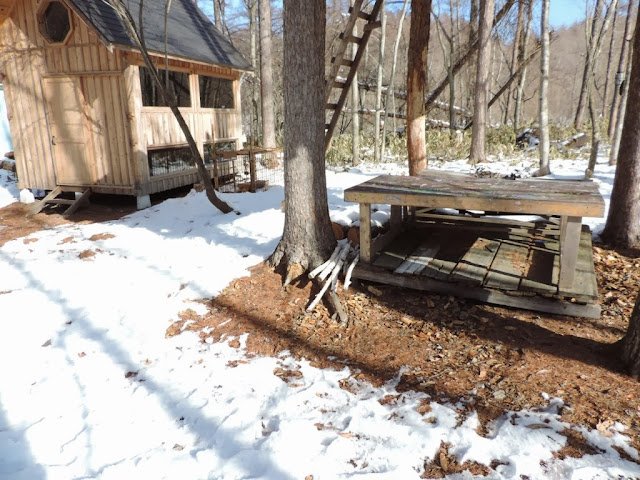 They put a feeder in front of the little wooden house and we were able to see birds coming to the feeder from inside. 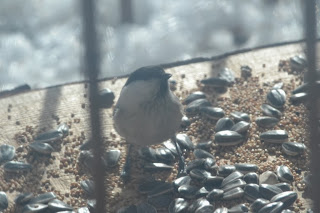 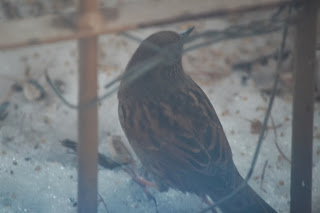 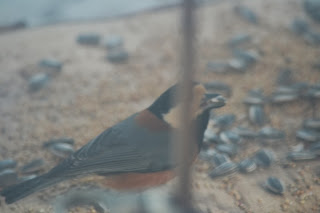 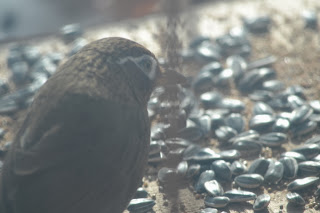 The leader of the walk (we were the only people on the walk though!) told us that they put out the feeder only a few weeks earlier so small birds had noticed but not bigger birds like woodpeckers. Still, we saw Willow Tits (Kogaraコガラ), Great Tits (Shijuukaraシジュウカラ), Varied Tits (Yamagaraヤマガラ), Nuthatches (Gojuukaraゴジュウカラ), our first Chinese Hwamei (Gabichouガビチョウ) and also our first Japanese Accentor (Kayakuguriカヤクグリ).


The windows of the cabin were tinted and the sun was in the wrong direction so unfortunately I didn't manage to get good pics of them but still we were chuffed to watch those birds picking sunflower seeds or millet grains very closeby, especially when the Hwamei and the Accentor popped up on the feeder from nowhere! 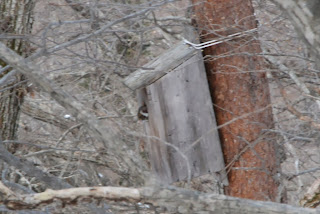 On one of the walks, we even spotted a Flying Squirrel (Musasabiムササビ) poking his head out of a nest box! We were told we were extremely lucky to see one during the day as they are nocturnal. 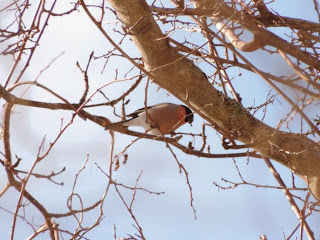 Four or five of Bullfinches (Usoウソ) were whistling shyly at the top of a tree, which still had plenty of wild vine grapes. 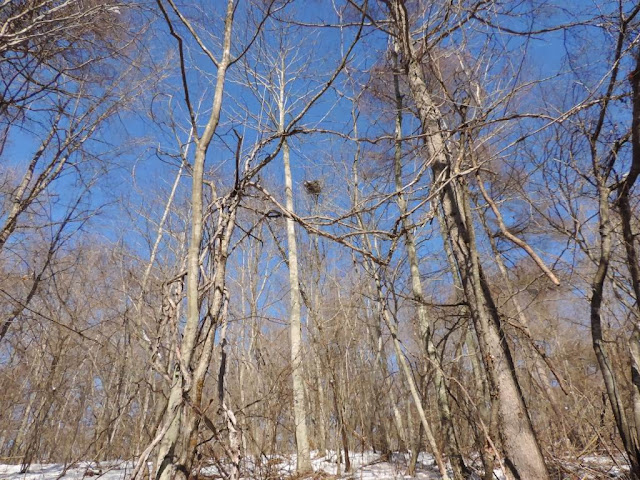 I was wondering what sort of bird had made that nest and the leader told us it was actually made by a Japanese Black Bear (Tsukinowagumaツキノワグマ). An adult bear is about 1.5m from its nose to its tail and they are agile enough to get to the top of a tree easily. When they have found their favourite nuts or fruits in a tree and somewhere cozy to sit on, they snap a twig, eat nuts/fruits and put the empty twig under their bum! That's how this bird-nest-looking-object-but-actually-bear's-chair was made. Amazing! Karuizawa has about 20 odd bears around the town and in the nearby mountains, we were told. Most of them have been captured once, radio-collared and are being monitored. They are deep in sleep at the moment so we didn't have to be worried about them (Thank God!) but between spring and autumn, people are recommended to carry a bell or anything that makes some noise. 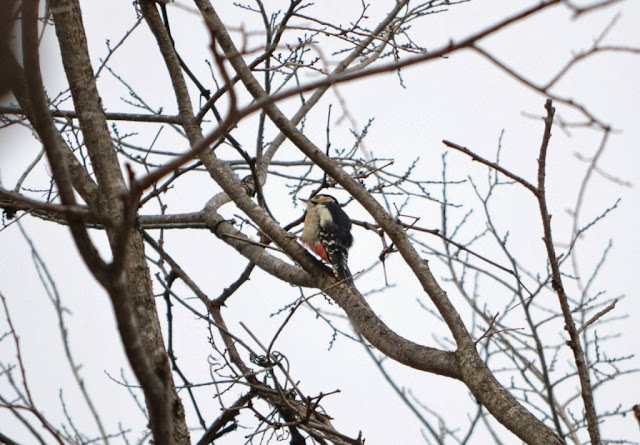 Our first Great Spotted Woodpecker (Akageraアカゲラ) in Japan. They are on higher grounds in Japan and we, living in Chiba, have very little chance to see one. 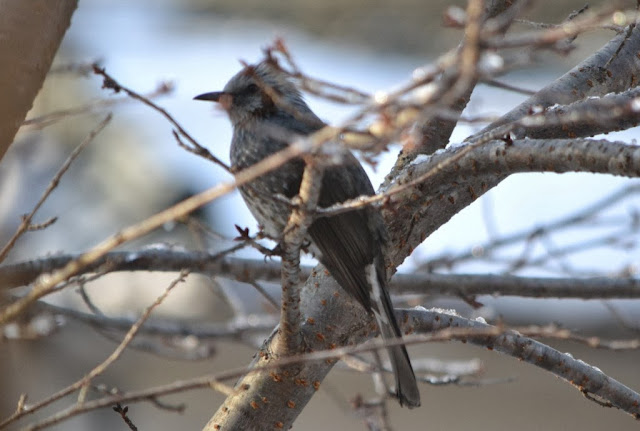 Brown-eared Bulbuls (Hiyodoriヒヨドリ) are all over the Sanctuary and the town just like in Chiba:) 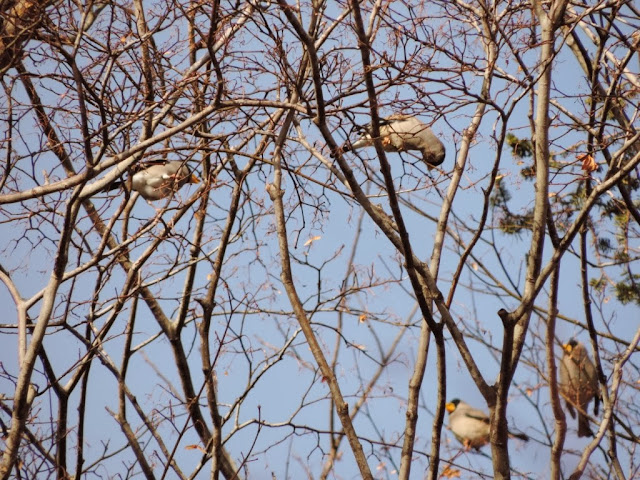 A huge flock of Japanese Grosbeaks (Ikaruイカル) flew into the trees by the car park one morning. They usually don't stay in one place but thanks to this lot foraging in the same trees for a while, we managed to observe them very well:) They look similar to a bullfinch or a hawfinch but are a lot bigger and more chatty! 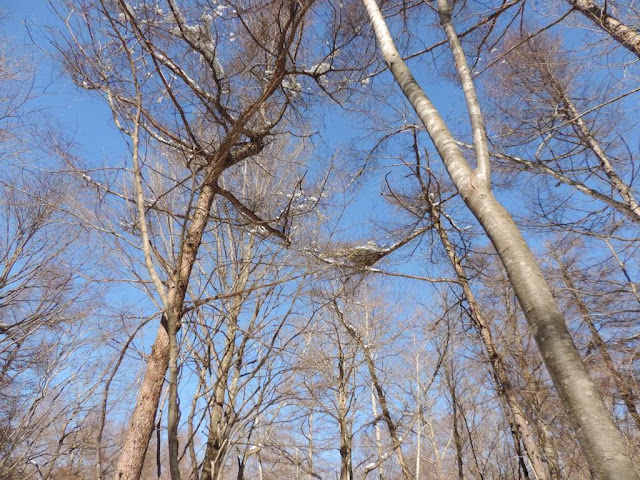 Birding in the snow-capped woods was great (cold but at least dry!) and the view of Mt Asama (an active volcano) from the woods was just stunning. 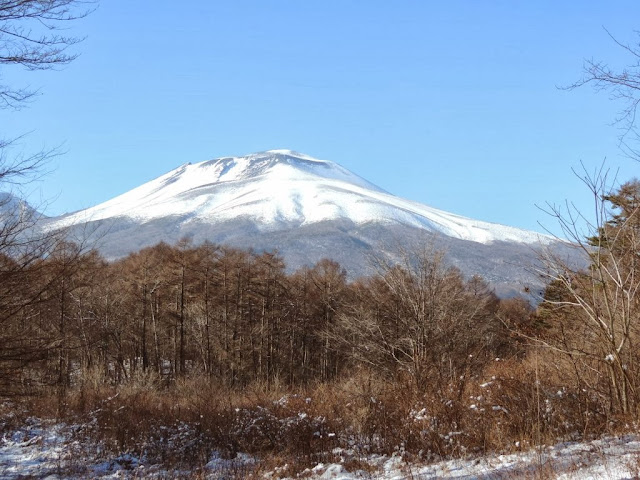 More info about the Bird Sanctuary
http://picchio.co.jp/eng/ (in English)