We decided to pop in the Ecology Park this morning again before the weather gets bad (heavy rain and gales are expected later on). The park was a bit quieter than the other day, possibly because the birds sensed the storm was on its way and decided to stay low?

Anyway, we managed to see some birds. 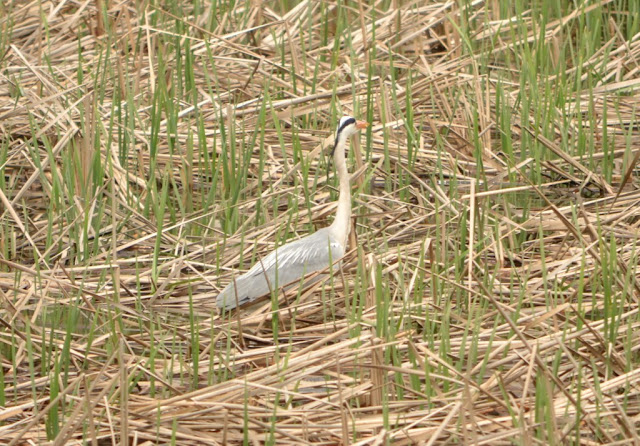 A Grey Heron (Aosagiアオサギ) was being patient by the lake. 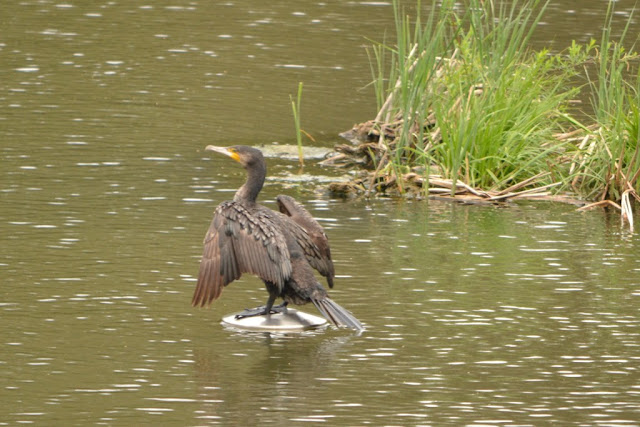 A Cormorant (Kawauカワウ) was drying her feathers, but the thing she was standing on was actually a buoy holding a water temperature gauge so it wasn't stable:) 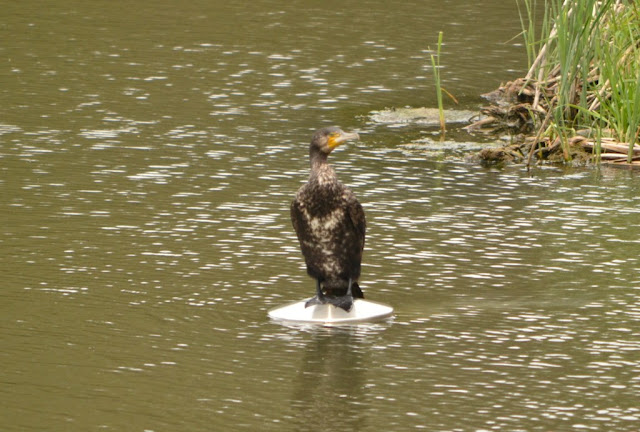 She couldn't keep her balance on the slippery and wobbly buoy and seemed to give up drying her feathers... 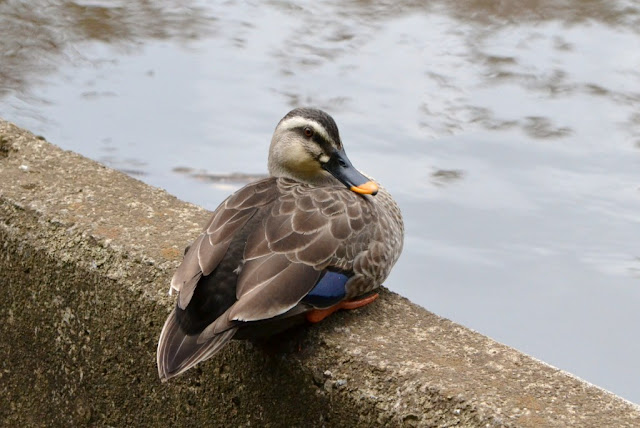 A Spot-billed Duck (Karugamoカルガモ) was resting on a wall by Aoba-ga-ike lake. 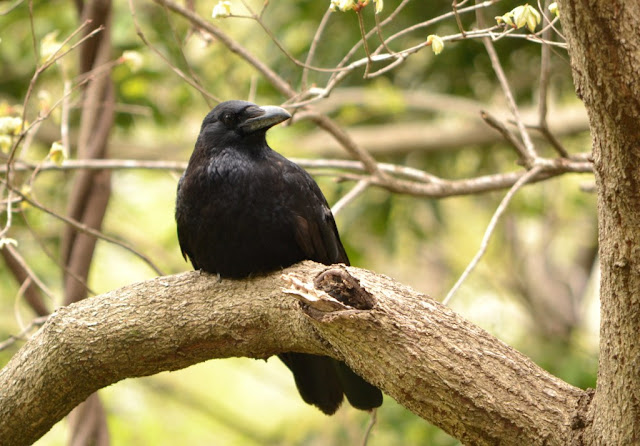 A lone Carrion Crow (Hashiboso-karasuハシボソカラス) was also resting on a low branch, watching over joggers and walkers. 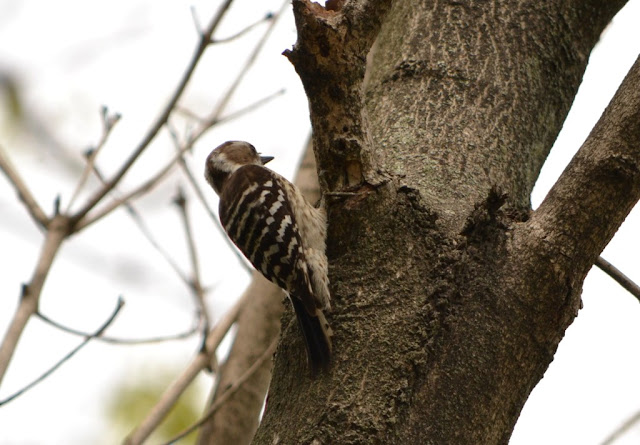 A little noisy Japanese Pygmy Woodpecker (Kogeraコゲラ)
They are easily spotted as they often make an unmistakable 'gheeeee' call. 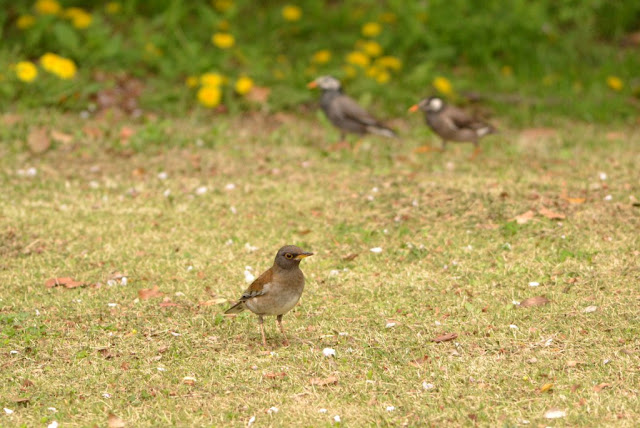 A Pale Thrush (Shiroharaシロハラ) and a couple of Grey Starlings (Mukudoriムクドリ) were foraging under a cherry tree. 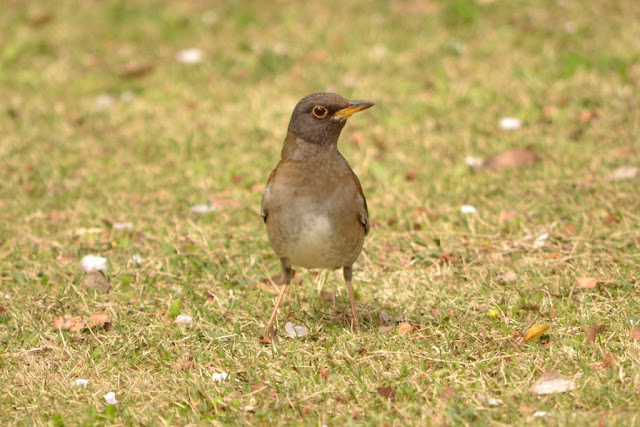 We could see his white belly and understood why they are called Shirohara in Japanese: Shiro(=white) hara(=belly), easy! 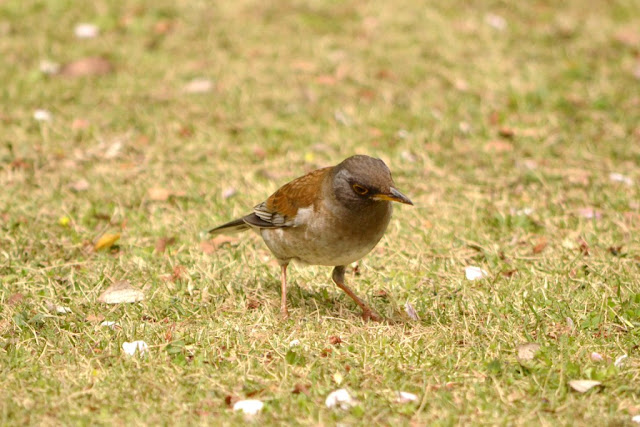 He was listening and pecking vigorously on the ground:) something delicious? 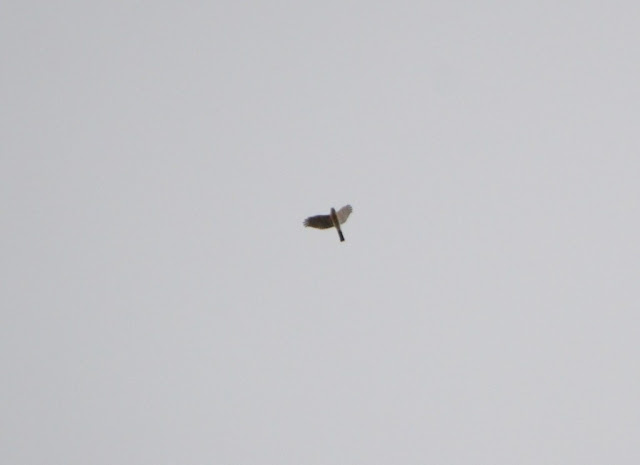 A bird of prey was circling high above our heads. I saw a Sparrowhawk being mobbed by three aggressive White Wagtails yesterday afternoon at the same place. Would this be the same one?

When we got to the park, a man told us that a snake, Japanese Rat Snake (Aodaisho-アオダイショウ), was basking on a branch of a tree near Aoba-ga-Ike Lake. He also told us that all the snakes in the park have come out from hibernation, including the venomous Pit Vipers (Mamushiマムシ)... 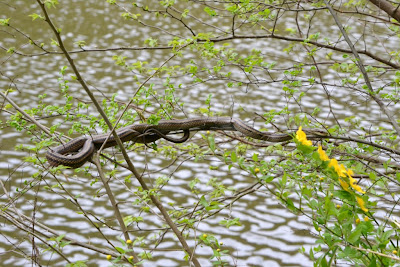