The migration of birds is coming to a kind of climax at the moment, with some going away from Japan to their wintering grounds and others heading towards Japan to winter here. We joined a 'migrant bird observation morning' at the tip of Futtsu Point, which is a spit sticking out into Tokyo Bay from the Boso Peninsula.

It was a lovely autumnal morning. 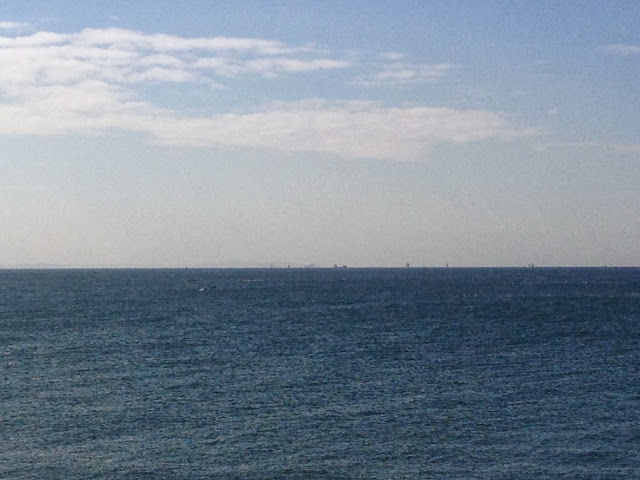 Towards the mouth of the bay 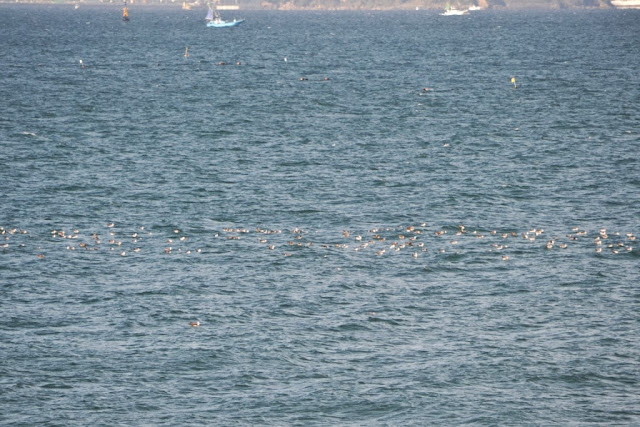 While we were waiting for our target birds, the first thing we noticed was large rafts of seabirds here and there. Wonder what birds they could be? 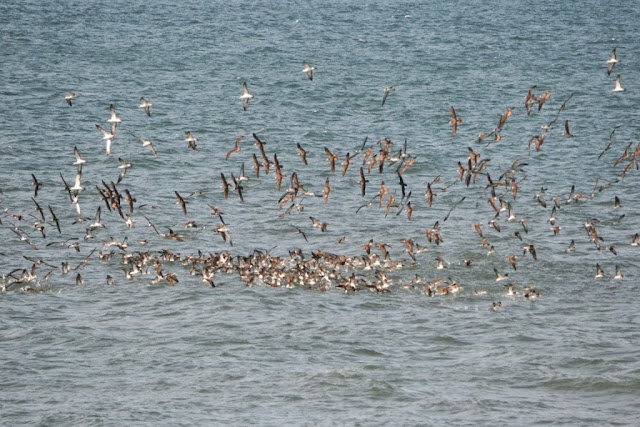 They were thousands of Streaked Shearwaters (Oomizunagidoriオオミズナギドリ)!! 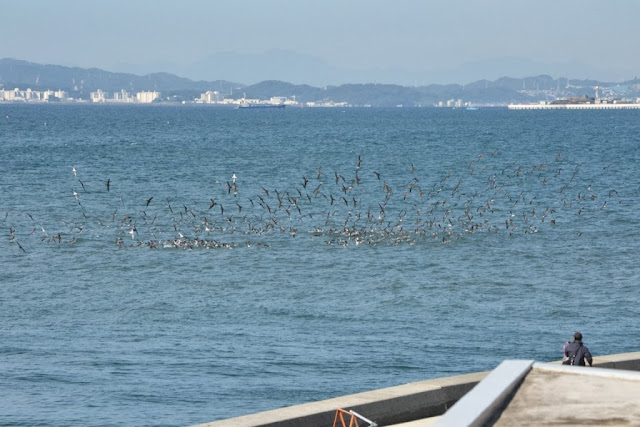 This is one of their rafts/flocks quite close to the land. 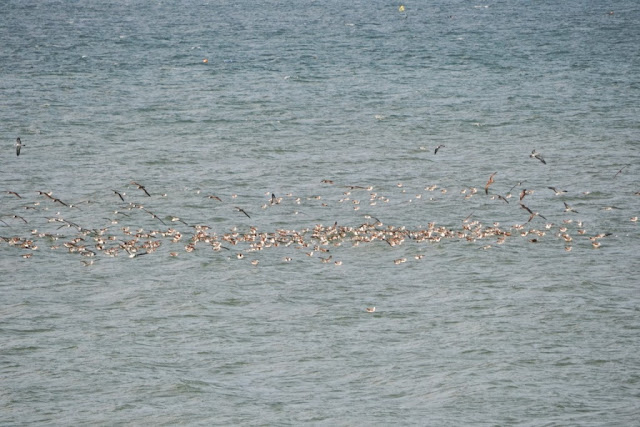 Some of the birds in a raft started flying and then... 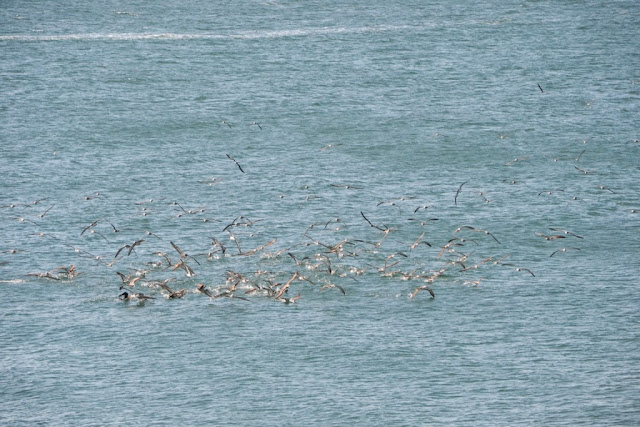 everyone else followed them - we occasionally had a chance to spot a school of small fish jumping above the water so presumably the birds followed the fish. 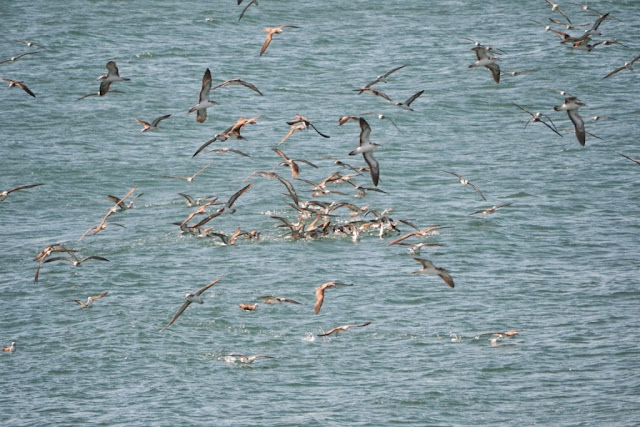 To have a close look, they went for the same spot at the same moment, like people in a train during the rush hour! 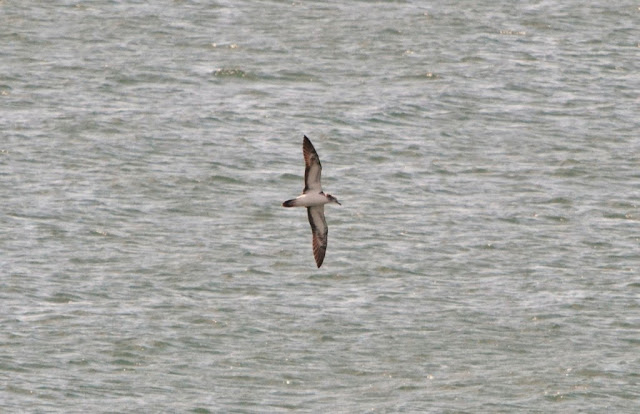 He came very close to the shore:) Their long wings and short body enable them to fly just above the water (shearing) using a subtle updraft. Cool!


The birds which flew past high above us between 8 to 10.30 a.m. were Grey-faced Buzzards（Sashibaサシバ), Oriental Honey-buzzards (Hachikumaハチクマ), a Kestrel (Chogenbouチョウゲンボウ), White and Yellow Wagtails (Hakusekireiハクセキレイ, Kisekireiキセキレイ) and Barn Swallows (Tsubameツバメ).
Unfortunately (only in terms of photo-taking), there's no photo of them as buzzards fly really high to catch a suitable wind to carry them, but never mind. It was a great experience to see them off! 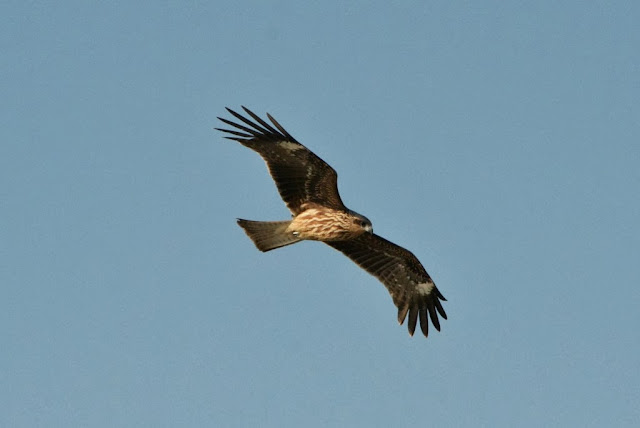 An awesome Black-eared Kite (Tobi or Tombiトビ/トンビ) flew effortlessly. We thought he was awesome but actually there are so many of them around so no one pays an attention to them... unless the kites snatch children's lunch on the beach! 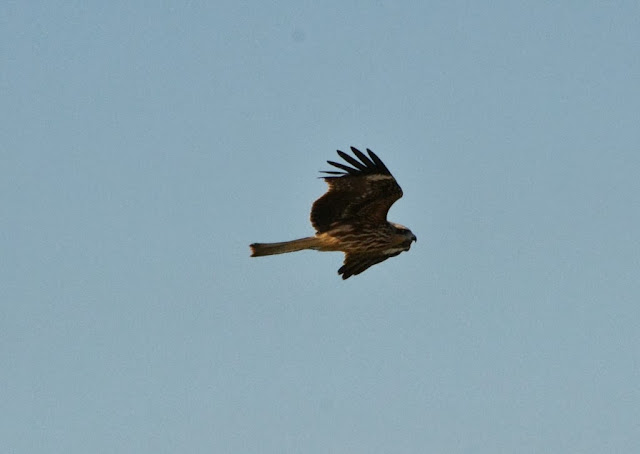 Black-eared Kites are a lot darker than the Red Kites we saw every day from our place in mid-Wales, but they are lovely birds all the same. 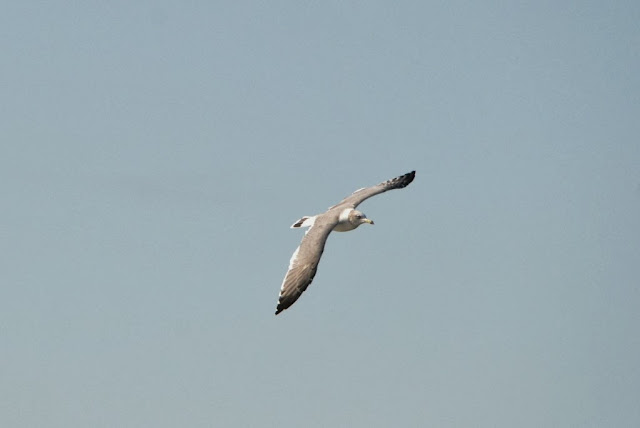 A Black-tailed Gull (Uminekoウミネコ) flew over us. Their calls sound like 'meow,' which is the origin of their Japanese name - sea(umi) cat(neko)! 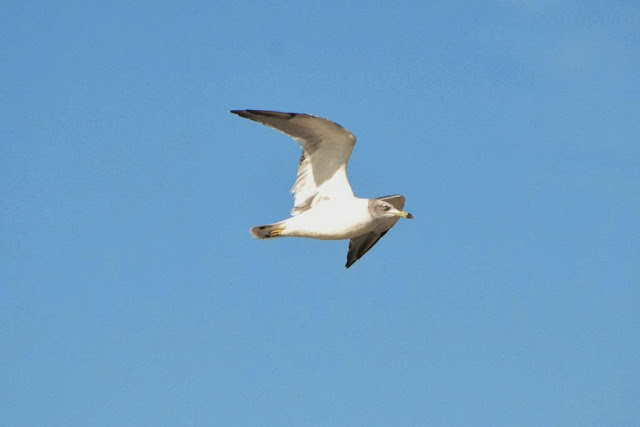 Black-tailed Gulls are the only resident gull around Tokyo Bay. 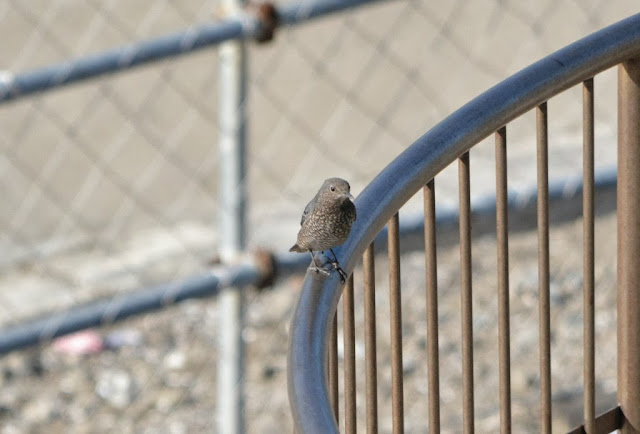 A female Blue Rock Thrush (Isohiyodoriイソヒヨドリ) came to say hello to us:) lovely one! 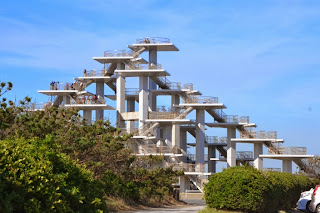 This hideous thing is at the very tip of the spit and we watched birds on it. In Japan, since the 50s, lots of beautiful riverbanks and coastlines have been destroyed and transformed into wildlife unfriendly concrete embankments, and this is still happening. Futtsu is no exception. It was a naturally formed sand spit but pine trees have been planted all the way to the tip and one side of the spit is all concrete. This changed its vegetation and even the sea current around it. I'm so ashamed of my country sometimes...